One of my favourite authors in Marathi is Bhalchandra Vanaji Nemade. Let me give you some background info on this amazing man. He was born in a village called Sangavi in Maharashtra on May 27th 1938. He studied for his Bachelor’s Degree in Fergusson College, Pune and he has not one but TWO Master’s Degrees – in English Literature from Mumbai University and in Linguistics from Deccan College, Pune. His PhD and D.Lit degrees were from North Maharashtra University and have been the torchbearer of many students who learn here.

He was also a great teacher as he taught English, Marathi and comparative literature in several institutions, including the School of Oriental and African Studies in London, before he retired Gurudeo Tagore Chair from Mumbai University.

It didn’t take long for the literary community to recognize his talent. He was awarded the Sahitya Akademi Award in 1991 for Teeka Svayanwar. And on the 5th of February, 2015, he received the prestigious Jnanpith award. This was the 50th Jnanpith Award and it is the highest honour in Indian Literature and Nemade is the fourth Marathi writer to win this award. I can think of no one better to receive this award and it’s an undisputable fact that he brings glory to the chair he sits and the awards he has amassed.  He also won the Padma Shri in 2011. 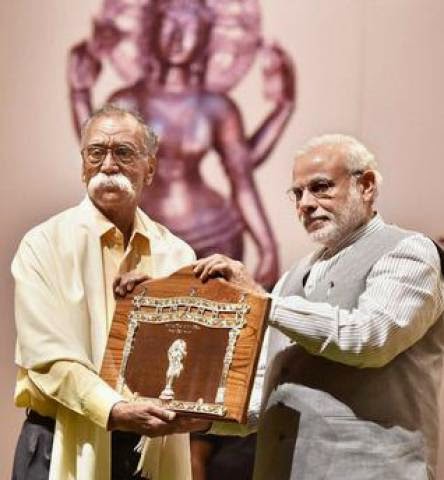 I remember being so engrossed in his first novel, it was called Kosala, (meaning Cocoon) and was published in 1963. It is based loosely on his own life and he managed to write this masterpiece in just sixteen days. It has been described as a novel that was ‘instrumental in changing the dimensions of the Marathi novel.’ His other novels were Hool, Zarila(1977), Bidar(1967) Zhool(1979) and Hindu – Jagnyachi Samruddha Adgal.  His poetry collections included Melody and Dekhani.

Nemade was also a literary critic and his work in this area include ‘The Influence of English on Marathi : A Sociolinguistic and Stylistic Study,’ ‘Rajahauns Prakashan, Indo-Anglian Writings: Two Lectures’ and ‘Nativism (Desivad), Indian Institute of Advanced Study.’ He propagated the theory of Deshivad which is a theory of nativism.

It emphasized the importance of the value of a write’s native heritage and language. Nemade has been recognized to be a strong advocate of literary movements in India. He was the leader of the Little Magazine Movement in the 1960s. He was also the editor of a Marathi Magazine called Vacha during this time.

I am very proud to be able to say that a winner of this prestigious award comes from my state.

Popular English poet Joseph Addison once said “Beauty commonly produces love, but cleanliness preserves it.” Being a country of billions, cleanliness is a major issue for India. The Government spends millions of rupees to keep the country clean. Mumbai city spends around 2300 crore rupees every year on waste/garbage disposal then why do we fail to keep our streets clean?

In the past, our cities which includes Delhi (the capital) and Mumbai have been listed amongst the unhygienic cities in the world. The reason behind this filthy image of our country is not the government but “us”. Yes, we did it by not caring for our environment.

With the dream of creating a clean and beautiful India, our honorable prime minister Narendra Modi introduced a national level campaign – “Swachh Bharat Abhiyan”. It was launched by Mr. Modi on 2 October at Rajghat, New Delhi during the Gandhi Jayanti ceremony. Modi quoted that we have shamed the father of our nation who advocated cleanliness. Swachh Bharat Abhiyan is greatly inspired by Mahatma Gandhi’s ideologies.

On the 66th death anniversary of the Mahatma, PM urged the nation to join hands, support this cause and make Gandhiji’s dream of a “Clean India” come true.

Bapu has preached about cleanliness on various occasions and here are some of his thoughts :

– “No one should spit or clean his nose on the streets.”
– “Those who spit after chewing betel leaves and tobacco have no consideration for the feelings of others.”
– “I learnt 35 years ago that a lavatory must be as clean as a drawing-room. I learnt this in the West.”
– “There is no gain saying that we have not learnt the art of external sanitation to the degree that the English have.”
– “To pass urine anywhere in a street, at any place not meant for the purpose should be regarded an offence.”

Mahatma Gandhi never hesitated to pick up the broom and clean his corridors. Modi did the same, he picked up the broom and initiated the Swachh Bharat on the street of Rajghat. This act instantly inspired many.

These initiatives inspired many. Countless people marched the streets with broom in their hands:

“The Swachh Bharat Abhiyan launched by Prime Minister Narendra Modi is one of the most welcome move undertaken by any government in recent past. In his small tenure of 4 months he has proved to be a visionary far greater than anyone from his batch.”  – Article Resource

“I realize today that, as aam admi get involved in cleaning (as I witnessed today) may be they will stop littering and will stop their near, dear, friends and folks from littering as much as possible. More importantly, they will convey a strong message to their children and kids around on maintaining a clean surrounding.” – Article Resource

I totally agree with Anand’s view. Apart from cleaning our streets this initiative is about inspiring and educating people about cleaning and sanitation. This “Abhiyan” will surely motivate our youths and kids to value their surroundings and their homes.

We need to inspire everyone to be part of 'Swachh Bharat Abhiyan', says WB Governor K N Tripathi nm4.in/yc4TpR via @narendramodi

Let us join Swachh Bharat Abhiyaan with a spirit of patriotism & fulfil Gandhi ji's dream of a Clean India. nm4.in/1rLoPOT

Inspite of all the support we still need to work harder. The objective of this campaign is not media attention or praise but a clean India. To achieve this objective we need to put in more effort, involve more people and pledge that we will maintain the cleanliness of our country.

The government will try its best to promote the vision of ‘Clean India’. The objective of this campaign is to develop a completely clean India by the 150th anniversary of Mahatma Gandhiji which is on October 2, 2019. To fulfill this dream, the prime minister has joined hands with 3 million volunteers which includes government employees, students from colleges and schools.

Mahatma Gandhi was a man of discipline and principles. Mr.Modi wants us to support this movement as a tribute to this great man. Our prime minister believes that if every Indian will decide never to litter or trash his/her surroundings, no street in India will ever be dirty.

So lets come together and make this dream come true.